In the UFO literature there are many sites that attribute to some American presidents experiences and positions favorable to an extraterrestrial presence in our system. These include Dwight Eisenhower, Richard Nixon, Jimmy Carter and Ronald Reagan. We do not know if it is “fakes” or authentic news. Among American presidents we limit ourselves to publishing the position of Jimmy Carter because there are filmed documents that refer to his public statements. 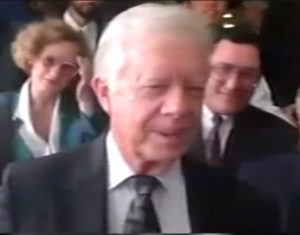 Carter stated publicly that on January 6, 1969, he saw a large, bright object in the sky that changed color. The comment was: “It was the most incredible of all the things I’ve ever seen.” During the election campaign, Carter promised to publish all information on UFO sightings in the United States. He kept his word and a series of documents, in fact, were made available to the public and were consulted by ufologists.

Dimitry Mèdvède became president of Russia from 2008 to 2012. At the end of his term Vladimir Pùtin was re-elected for the third time, and Dimitry was appointed prime minister. In December 2012 he was a guest of a very popular television program. During a break, one of the journalists present asked him some questions about the position of the Russian government on the subject of UFOs. Dimitry said that in a suitcase, along with the nuclear codes, the Russian president is given a folder entirely dedicated to documents on UFOs and extraterrestrials who have visited the earth, and that here are still bases. At the end of the mandate, these documents are passed to the next president.

The following video documents the testimonies of the two presidents : Video Youtube