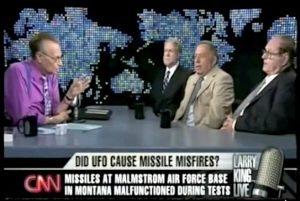 There are hundreds of unsealed documents reporting that UFOs have shown a clear and constant interest in atomic missile bases.

In 1964 Lieutenant Robert Jacobs was a cameraman of the US Army, who worked at the Vandenberg air base in California. While he was filming a missile test, a UFO shown up at around 12,000 km / h. He destroyed the missile’s nuclear warhead and then disappeared in the same direction he had come from.

As soon as Jecobs’ superiors saw the movie, they kidnapped him and handed it over to the CIA. Jecobs was forced to say nothing about such an event. The testimony of Jecobs is confirmed by Ross Dedrickson who, at that time, was a colonel of military aviation.

In 1967 the officer Robert Salas was in charge for controlling the management of the rocket launching missiles at the Maelstrom base in Montana. We were in the middle of the cold war and the American missiles, with nuclear warheads, were kept constantly ready to be launched at any time. While Salas was under the ground in the control room, he was informed that a “flying saucer” of circular shape and metallic consistency had suddenly appeared in the sky and had been standing for several minutes just above the entrance to the base. Within a few seconds the 10 missiles were all in “no go” condition: disabled. It took more than a day to restore the situation.

It must be borne in mind that these 10 missiles are designed to be independent systems. If something damages a missile, it will not affect the other missiles. Also Salas, was forced not to tell anything about the incident.

The following video documents the testimonies of the officers involved in these two surprising facts related to UFOs: Video Youtube