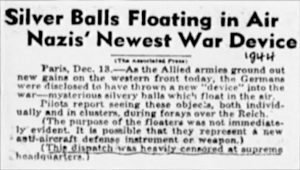 Starting from the Second World War, some pilots of military aircraft declared to have seen and photographed small spheres of small dimensions, able to stop, change direction and accelerate at very high speed. This presence affected the entire war scenario, from Europe, to the Far Eastern, and soon everybody realized that they were not secret weapons made by the enemy. They were given the name Foo Figthers. A sighting comparable to those reported by the pilots during the Second World War, occurred during an experimental flight of the Concord. A silver sphere shadowed the Concord and that scene was filmed by one of the operators on the British Airways plane who was following that experimental test.

Also the American astronaut James Mac Divitt released an extraordinary testimony about this matter, for he was able to make the footage of a sphere that had approached his spacecraft during a flight on Gemini 4, in June 1965.

Here follows the video that documents some of these sightings: Video Youtube