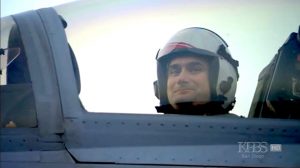 The event in question is one of those that gave rise to a secret program, now recognized by the Pentagon, called Advanced Aviation Threat Identification, which was operational between 2007 and 2012. However, according to the Washington Post, the research of the Pentagon would actually still be ongoing.
The command of the American Navy, over the course of two weeks, had drawn about twenty flying objects that behaved in a very strange way. In one of these cases, a normal training mission was taking place nearby in preparation for the war in Iraq. The command suspended the exercise and sent two fighters to the area where one of these UFOs had been traced. At the head of the first fighter was the US Navy pilot officer David Fravor who was in command of the F-18 squadron, and the other was Lt. Jim Slaight.
After retiring on December 19, 2017, 13 years after this extraordinary experience, David Fravor has decided to release an interview to the Washington Post that has shaken American public opinion.

David Fravor was at the controls of his F / A-18 Hornet about 60-100 miles off the Californian coast, between San Diego and Ensenada, in Mexico. During the exercise, Fravor was ordered to head about 60 miles west of his current position. The command informed him that flying objects had been identified that descended from an altitude of twenty-four thousand meters to six thousand meters and then disappeared. When Fravor and Slaight arrived near the point marked, they saw an object flying over the ocean. «It was white and had the shape of a mint, the same size as a Hornet, twelve meters long, without wings». The object stood «floating near the water», but did not produce any turbulence typical of helicopter blades on the water. «As I approached – says Fravor – he accelerated and disappeared. Faster than anything I’ve ever seen in my life. I’m not crazy, I didn’t drink. Let’s say that after eighteen years of flight I saw almost everything that can be seen, but that was something really incredible, it was a real object, above all, it was something NOT terrestrial».

Here is the incredible testimony of David Fravor: Video Youtube