An incredible encounter with extraterrestrials 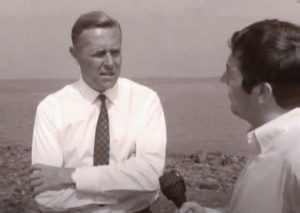 In 1967 what we consider the most important and the most reliable encounter of an Earthling with beings from other planets took place. It involves 8 inhabitants of the planet Iarga and Adrian Beers (aka Stefan Denaerde), a Dutch industrialist who was in the North Sea on a 16-meter sailing ship, on holiday with his wife and three children.
The meeting took place following the impact of the boat with a flying saucer immersed in water. It is a meeting wanted by extraterrestrials and carried out by these eight representatives of the planet Iarga. It is a planet and an extraterrestrial society that is part of a galactic confederation and that has support bases in our solar system.

The position of science on UFOs

Thanks to modern telescopes, space stations and all the new technologies and knowledge, the scientific world has officially opened up to the idea that we are not alone in the universe. The study of the star systems of our galaxy confirms the existence of Earth-like planets, where intelligent species could have developed and therefore human societies comparable to those on Earth. However, these are planets thousands of light years away. Science, therefore, absolutely excludes that these distances could allow hypothetical extraterrestrial societies to reach us.

At the same time, however, the UFO phenomenon is increasingly rampant and affects all nations and societies of the world. The many inexplicable sightings have convinced, of the extraterrestrial nature of UFOs, qualified people in every social sphere, from the scientific, to the political and religious. The case history is so vast and involved so many witnesses, judged worthy of credibility, that the hypothesis of a real extraterrestrial presence really undermines the adverse positions of official science.

There are, in fact, astronomers, astronauts, airplane pilots, high officials of the state, both military and political, who have declared that they have seen flying objects which, according to them, are not attributable to natural phenomena or objects of terrestrial origin.

Those who understand the positions of science, but are inclined to believe that there is an alien presence behind the UFO phenomenon, inevitably asks these questions: